10 Things you
SHOULD KNOW WHEN
YOU GO SOLAR 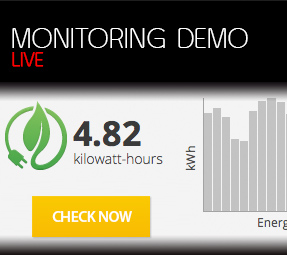 How does it work?

Solar electric systems convert sunlight to "DC" or direct current electricity the same type of electricity that is produced by every-day batteries where electrons flow in one direction. Solar cells, generally consisting of 2 layers of silicon (semi-conductor material) and a separation layer, are wired together and assembled into panels or modules. When the cells are exposed to sunlight, photons from the sun interact with electrons in the upper silicon layer, basically knocking them loose from their associated atoms. The loose electrons are attracted to atoms in the lower layer of silicon and travel through the wire to get there. This movement of electrons from one side of the cell to the other through the wire is electrical current. The term "photovoltaic" (or PV for short) is nicely descriptive of this process.

When a solar panel is manufactured, the PV cells are wired together in "series". The output voltage of the panel depends on the number of cells in the series. Common nominal output voltages are 12, 18, and 24 volts DC. The output wattage is dependent on the efficiency of the cells and the size or area of each cell in the panel. The larger and more efficient the cells, the greater the wattage will be per square foot. Panels made using more efficient cells tend to be more expensive.

When the installer assembles a PV system, an exact number of panels are wired in series strings to achieve the target voltage required by the inverter or other load. Then groups of panel strings are often wired together in "parallel" in order to increase the wattage of the system. Once all these components are in place, the sun provides the energy and the system simply manufactures electricity! 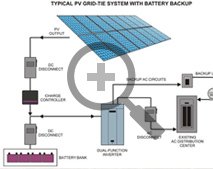 The "Grid-Tie With Battery Backup" PV system incorporates one or more special AC circuits which are not directly connected to the electric grid like the rest of the building, but are always powered through the inverter and/or charge controller. These circuits may power a refrigerator, selected lights, computers or servers... any devices the owner deems essential.


The "dual function" inverter can supply the utility grid with any excess power produced by the system like the "grid-tie" inverter, plus the inverter works with the PV modules and battery bank (through the charge controller) to provide AC power to the backup circuits when the grid is down. The charge controller manages the battery voltage, keeping them fully charged when the grid is live, and preventing them from being depleted when the system is drawing power from them. 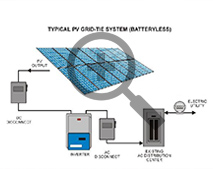 There are no batteries to store excess power generated--the electric utility essentially stores it for you through a system called "net-metering." DC (direct current) generated by the PV panels is converted into AC (alternating current) power by the inverter (exactly the same high quality AC current delivered to your site by the utility-provided power grid).


Output from the inverter is connected to your existing distribution panel (breaker panel) which feeds the rest of your site. While the system is generating electricity, power needs are provided by the PV system (up to its capacity), reducing or eliminating the power you would have drawn from the utility grid at that time. During periods when your grid-tie system is generating even more energy than your site requires, any excess is fed back into the grid for others to use and the electric utility company "buys" it from you at the retail rate. They provide credits to your account for all the power that is pushed back into the grid through the meter. And your meter will literally run backwards! When your site needs to draw more energy than it is producing (say, during cloudy conditions or at night), electricity is provided by the power grid in the normal manner and is first paid for by your accumulated credits.